National Tour of Menopause The Musical plays Richmond Sunday, November 4, 2018 for One Performance Only 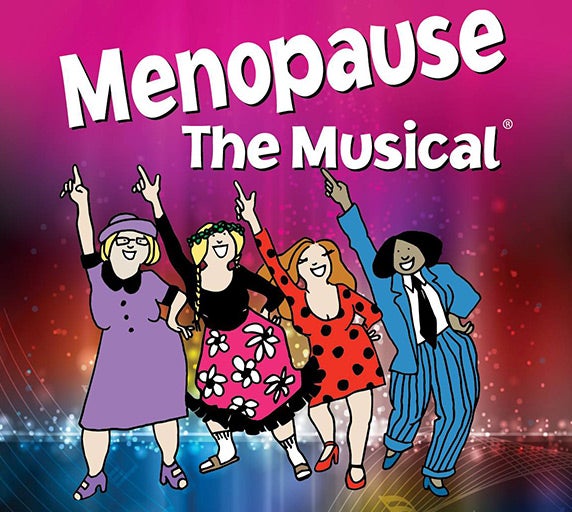 GFour Productions, winners of 56 Drama Desk and 44 Tony Awards are proudly bringing the international hit show Menopause The Musical® to Richmond playing Carpenter Theatre at Dominion Energy Center for one performance, Sunday, November 4, 2018 at 2 pm. Menopause The Musical® is a groundbreaking celebration of women who are on the brink of, in the middle of, or have survived “The Change.” Tickets go on sale Friday, August 10, 2018 at 10 am and can be purchased at www.BroadwayInRichmond.com, by calling 800-514-3849 (ETIX), or at the Dominion Energy Center and Altria Theater box offices. Group discounts for 10+ are also available by calling 804-592-3401.

Menopause The Musical® is a groundbreaking celebration of women who are on the brink of, in the middle of, or have survived “The Change.” Now celebrating 16 years of female empowerment through hilarious musical comedy, Menopause The Musical® has evolved as a "grassroots" movement of women who deal with life adjustments after 40 by embracing each other and the road ahead.

Set in a department store, four women meet while shopping for a black lace bra at a lingerie sale. After noticing similarities among one another, the cast jokes about their woeful hot flashes, mood swings, wrinkles, weight gain and much more. These women form a sisterhood and unique bond with the entire audience as they rejoice in celebrating that menopause is no longer “The Silent Passage.”

Inspired by a hot flash and a bottle of wine, Menopause The Musical® was created as a celebration of women who find themselves at any stage of “The Change.” The laughter-filled 90-minute production gets audience members out of their seats and singing along to parodies from classic pop songs of the ‘60s, ‘70s and ‘80s.

Menopause The Musical®, now in its 17th year of production, is recognized as the longest-running scripted production in Las Vegas and continues to entertain nightly at Harrah’s Las Vegas. The hilarious musical has entertained audiences across the country in more than 450 U.S. cities, nearly 300 international cities and a total of 15 countries. For more information, visit www.MenopauseTheMusical.com.

About GFour Productions
Proud producers of MENOPAUSE THE MUSICAL, now in its seventeenth year as the longest-running musical in Las Vegas history and can be seen nightly at Harrah’s Hotel and Casino on the Las Vegas strip. MENOPAUSE is also on tour around the U.S., as well as playing in Spain, Australia, Mexico City, and the U.K.. Other recent productions include THE PLAY THAT GOES WRONG on Broadway, winner of London’s Olivier Award for Best Comedy, and starting its U.S. tour this fall; their acclaimed production of DREAMGIRLS, currently selling out on London's West End; GROUNDHOG DAY THE MUSICAL, nominated for 7 Tony Awards including Best Musical; and their Tony Award-nominated production of FIDDLER ON THE ROOF, also launching its national tour this fall. Other selected highlights include winning the 2013 Tony Award for their 50th anniversary production of Edward Albee’s WHO’S AFRAID OF VIRGINIA WOOLF; Co-financing the 5 time Tony Award, 5 time Drama Desk Award, and 7 time Olivier Award winner for Best Musical, MATILDA THE MUSICAL; and producing the popular 9 TO 5 THE MUSICAL with music by Dolly Parton, and RING OF FIRE the Johnny Cash Musical Show. They began producing in 1981 with NINE, winning the Tony Award that year for Best Musical. Among their favorite past Broadway productions are MY ONE AND ONLY starring Tommy Tune, ZORBA THE GREEK starring Anthony Quinn, THE RINK starring Liza Minnelli, BABY, GRAND HOTEL, GRIND, BIG, TRUE WEST, the original and the revival of LA CAGE AUX FOLLES which won them Tony Awards for Best Musical in 1983 and Best Revival in 2004. Their combined shows have been nominated for 121 Tony Awards, winning 44 and 110 Drama Desk Awards, winning 56. For more information, please visit GFourProductions.com.

Presented by Broadway In Richmond