The Masked Singer Tour Arrives In Richmond On June 18 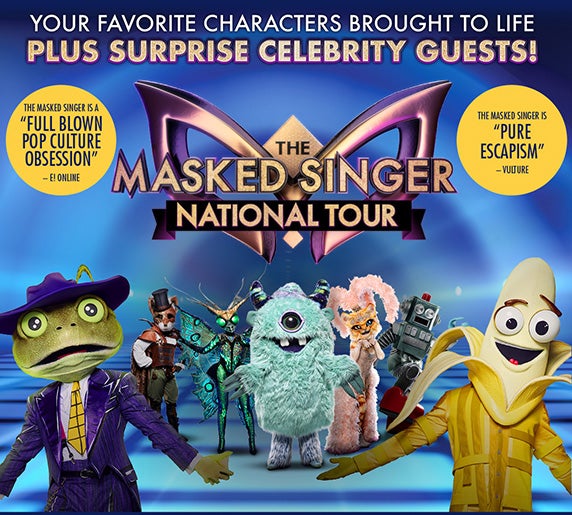 Your Favorite Characters Brought to Life, Plus Surprise Celebrity Guests

Tickets On Sale Now at LiveNation.com

(RICHMOND, VA) – February 13, 2020 – On the heels of last week’s Season Three debut of FOX’s #1 hit THE MASKED SINGER, Right Angle Entertainment today announced that an all new live show, THE MASKED SINGER National Tour, will hit the road to Dominion Energy Center in Richmond on June 18, 2020, bringing the #1 show on television to the next level on its first-ever North American tour. Presented by Live Nation, THE MASKED SINGER tour kicks off in Detroit, MI, on May 28 before zigzagging its way to more than 45 cities. Audiences can expect to see their favorite characters brought to life onstage, as well as surprise celebrity guests, amazing new performances and a can’t-miss spectacular live show for audiences of all ages. Tickets for the tour are on sale now at LiveNation.com.

Tickets for the Richmond concert on Thursday, June 18 at 7:30PM can be purchased online at DominionEnergyCenter.com, by phone at 800-513-ETIX (3849) or in person at the Dominion Energy Center and Altria Theater box offices. Prices range from $59.50 - $119.50. Additional fees may apply. VIP Packages are also available for purchase.

The live show will feature two celebrity guest hosts, as well as one local celebrity who will be in a top-secret disguise, keeping the audience guessing until they are unmasked at the end of the night.

Right Angle Entertainment in partnership with Guy Phillips are producing the tour, and Mark “Swany” Swanhart will direct. With decades of experience in television, film and live entertainment, Phillips, Swanhart and Right Angle Entertainment have transformed television hits, including “Dancing with the Stars,” “America’s Got Talent” and “The Bachelor,” into live stage productions that entertain audiences around the world.

For more information including the full tour schedule and ticket information, visit www.themaskedsingertour.com.